Forgiving - Even When It Feels Impossible 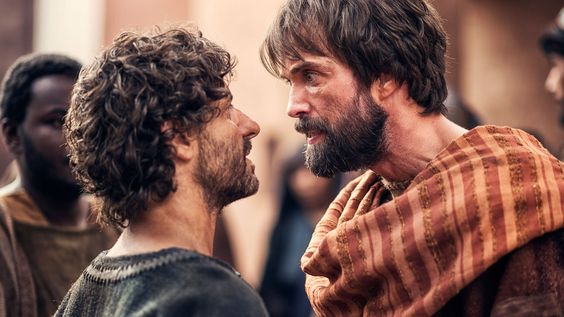 Peter faces Paul and wrestles with how to forgive this new Christian who was killing his friends just weeks prior.  (Picture taken from A.D. Kingdom and Empire series)

“Saul was breathing out murderous threats against the Lord’s disciples…” (Acts 9:1).

That’s a pretty scary verse to me. If you were a follower of Jesus in those early days of the church, Saul was a real life horror film playing out in front of you.

Acts 8 tells us that he was going from house to house dragging off men and women to prison that were disciples of Jesus. Saul is the one who is doing a courtesy coat check for the angry mob that’s picking up stones to kill Stephen. He’s a serious problem for the apostles and other followers of Jesus resulting in their leaving the city of Jerusalem in large numbers. This persecution accelerated the pace of the gospel of Jesus Christ going out.

Then Jesus confronts Saul on the way to Damascus as he was taking his persecution of Christians on the road to nearby Syria. Saul is literally blinded by the appearance of Jesus and is healed by Ananias, a Christian living in Damascus. When the Holy Spirit prompted Ananias to go and place his hands on Saul’s eyes, he questioned the Lord on whether this risky ministry move was a good idea. It marked the first time one of the followers of Jesus would have to figure out how to forgive someone who was killing them just days beforehand. This was a stretch for Ananias, but he was obedient and ended up healing Saul’s eyes and baptizing him into the Christian faith.

When Saul (whose name is changed to Paul in Acts 13:9) began preaching to the Jews in that city, it didn’t take long before they too wanted to kill him. Paul is smuggled out of the city to save his life and goes to Jerusalem. Upon arriving, he finds the Christians are having a hard time trusting him (the same man who was killing their brothers just months before). The Apostles struggled to believe that this wasn’t a set up – and it took Barnabas to vouch for the true conversion of Paul. After the disciples work through anger and their mistrust of Paul, the Grecian Jews begin plotting to kill him, so they whisk Paul out of the city to Tarsus.

Paul suffers for the rest of his life being persecuted for following Jesus, just as Jesus prophesied he would when he met him on the road to Damascus. While I feel for Paul, I want to focus us on the emotions of the followers of Jesus who were persecuted by Saul, as they are asked to forgive this man who had been such a threat to them. Choosing to forgive Paul directly correlated with belief that Jesus truly is able to change a heart. Did they believe in the power of Jesus to save, heal, deliver and change a life enough to let Paul into their brotherhood? Could they actually forgive him for killing their brothers and sisters?

Forgiving others hasn’t changed all that much over the past 2000 years. When people come to Christ and repent of their sins, do we really believe that Jesus has enough power to change them? If you’re human, this makes your head spin and you wrestle between your head and your heart. For the early church to keep moving forward, the people were forced to forgive Paul and embrace him.

Who is God trying to get you to forgive? If they have come to Jesus in repentance, can you believe that Jesus has changed their heart? Who is the Lord calling you to forgive today? Listen to what the Holy Spirit says, and step into a new place of freedom.