From Orphans to Sons and Daughters 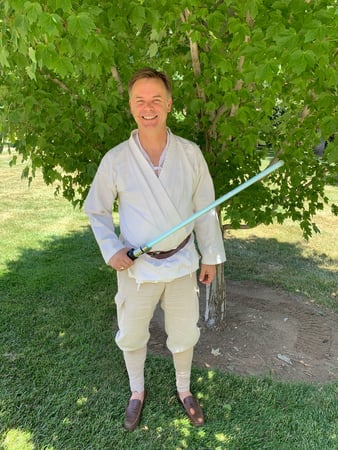 Our true destiny is to belong to a family as sons or daughters, not to strive and perform in desperate hope of being noticed like an orphan.

As a son, I know I can do things to disappoint my parents, but I don’t believe that I can do anything to stop being a son.

My favorite STAR WARS character has always been Luke Skywalker. He plays the original hero of the STAR WARS sci-fi saga that has spanned 43 years since 1977. When we first met this fresh-faced kid, he is listless and pining away. Forced to be a robot mechanic for farming, his life is isolated and without purpose.  Luke knows that he was born for a larger purpose and destiny. He dreams of being like his father, fighting the evil empire as a rebel alliance pilot.

If you have seen the movies, we watch Luke grow up and begin walking in the destiny of his life.  Not only does he become a freedom fighter for the rebel alliance, but he rises to the level of Jedi master.  We see him training others in the ways of “the force” and walking in great power and authority. As an isolated hermit, Luke has to be talked into taking Rey under his wing to train her and help her become who she was created to be. Though he was a legend in his galaxy, Luke was tormented by shame and still fell into “orphan thinking” even at the end of his life.

Luke was never able to get past the fact that his earthly father was the evil Darth Vader.  Luke struggles his whole life, despite his fame and notoriety, as an orphan who doesn’t feel like he measures up. Luke’s life is surrounded by loss. His mother died when he and his sister were born, he lost his aunt and uncle who raised him. Then he lost his mentors: Obi Wan Kenobi, his adopted father/mentor and then Yoda, who became his mentor after Obi Wan Kenobi.

Do you struggle with living out of an "orphan heart"?

As Christians, we have been adopted as sons and daughters, and we are no longer orphans.  Though we may read that truth in the Bible, we can slide back into our old thinking patterns and begin living out of the heart of an orphan.

Here are four aspects of what it looks like to live out of the heart of an orphan, that I talked about in last Sunday message:

If you can relate to any of these aspects of living out of an orphan heart, here are five suggestions I made to help you start on your journey back to living out of the heart of a son or a daughter.

By the end of the last Star Wars movie, Luke Skywalker confesses that he was wrong to isolate himself from the rest of the world after failing.  He realizes that living out of his orphan heart didn’t protect him from more hurt, and that it actually hurt others.  When he tells Rey, “I was wrong,” there is a collective sigh of relief from all of us who resonate with this admission.  The galaxy would have been better and richer if Luke would have remained engaged in family.

This is true for all of us.  When we remain engaged in family, we will be better able to live out our destinies in our church, our city, and our world.

No matter how many times you blow it, you are still wanted and needed by this family… not as a slave, but as a son or daughter.

This was true for the prodigal son in Luke 15.  Even though the younger son dishonors his father by demanding his inheritance early and then squanders it - it is the father who sees the son walking back home while he was still a long way off.  This means that the father has been constantly watching the horizon to see the familiar gate of his son.  Instead of shaming him, disowning him, or even letting the shame/honor system of the day destroy him – he hikes up his robes in an undignified way and runs to his son (something no middle-aged man would ever do).  The prodigal son seeks to return simply as a servant, but the father insisted that his “son” had come home.

I encourage you to keep fighting to live out of the heart of a son or daughter.

We will continue talking about our identity in Christ these next two Sundays, and this Fall I will teach a series on being “sons and daughters”.

If you missed our series Identity Theft Recovering your TRUE identity in Christ, click here to listen to the podcast or watch the video.