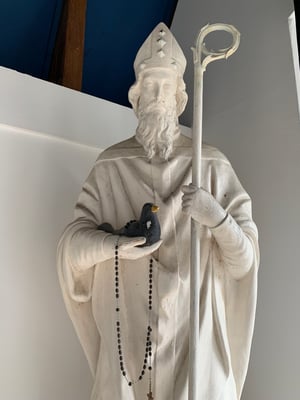 The real holiday is supposed to be tomorrow.

For centuries the Christian church has celebrated All Saints Day on November 1st.  It is a celebration of the saints to honor them for setting an example for us to follow in our faith.  It was originally All Hallow’s Day or Hallowmas… meaning the holy feast, a mass given to honor the holy ones, a holy day on the calendar.  The celebration would start on October 31st in the evening with the vespers service.  In celebrating this feast day, the church has celebrated a spiritual bond between those in heaven (sometimes called the “Church triumphant”) and the living (the “Church militant”).

Whoa, What? Celebrating the Saints?

Protestants get a little “dodgy” about celebrating the saints, stating concerns that we pray to God himself and don’t need to appeal to holy men and women in heaven to convince God to help us.

I agree that we can boldly approach the throne of heaven without the help of a saint.  It is also my conviction that we worship the living God with all Christians past and present, sometimes thought of as the communion of saints.  Isn’t it incredible that when we sing worship songs on Sundays in the dome, there are choirs of believers in heaven who join us in singing?

We sometimes miss out on the testimonies of glorified saints who are now in heaven because we don’t know our church history.  I have personally grown significantly this past year as I have studied the Celtic saints who lived 400 – 750 AD.

To celebrate this All Hallow’s Eve in its purest context:

Allow me to share with you about one of my favorite saints whom you probably have never heard of. St. Kevin, an Irish saint was born in 498 AD.  Kevin was born to nobles and chose to live the life of a monk and ordained as a bishop.  Many people believe that Kevin was the fulfillment of a prophesy of St. Patrick that the Lord would send a holy man to evangelize the region of Ireland just south of Dublin.

Following his ordination, Kevin lived as a hermit in a cave at Glendalough for about 7 years.  A 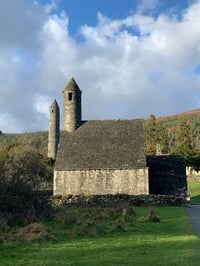 farmer discovered Kevin and convinced him to allow others to join him in the valley of the two lakes.   Kevin consented and the monastic village was started along with a monastery and churches being built not far from where his cave was.  Glendalough became a center of pilgrimage and today is still a place pilgrims make their way to meet Jesus in profound ways.

Like many of the saints of old, Kevin lived in harmony with nature in supernatural ways.

He is known for such a close connection with the birds that they would come and sit on his arms.  Miracles were also associated with this man of God.  He once gave some needy men four of his sheep as a gift – and in the evening, when the sheep were counted, he still had the same number of sheep!

On one occasion when he was feeding some hungry travelers, he instructed his attendants to fill the ale jars with water and to gather all the bare meat bones.  Then he prayed alone, and it is said, the water turned to ale and the bones were covered with meat again.  There are stories about apples growing on willow trees at the monastery and animals who were being hunted running to his feet and laying down in peace.

Kevin was also known as a very handsome man.

When a beautiful young maiden named Kathleen mistook his friendship for romantic interest, she boldly followed him into the woods to pursue him.

It is said that Kevin threw himself into the thorny pine needles and rolled around… effectively turning down the lovely Kathleen.  She later asked Kevin for his forgiveness and she's said to have become a very holy woman.  I appreciate that, though Kevin was isolated from many people, he still stood firm when tempted.

There were so many people who were drawn to Kevin it was said that Glendalough became a “veritable city in the desert.”

Kevin became a father to many men and women who were there to learn in Glendalough, and then venture out to start new monasteries across Ireland.  Many think of St. Kevin like the “St. Francis of Ireland.”  He died in 618, and was canonized as a saint by the church in 1903.

This is the prayer I have been praying:

Lord, I pray that you would make me a person of peace who others want to pursue.  May your voice speak through creation, through animals and those who journey with me.  Grant us strength to do the right thing in temptation, even when everyone around us has fallen.  Jesus, work in power and do miracles in our midst – not for our glory, but for yours.  Help us to be teachable and learn from those who have lived in centuries before us.  On this All Hallow’s Eve, we celebrate and worship Jesus, with all the saints and angels of heaven.  Amen.