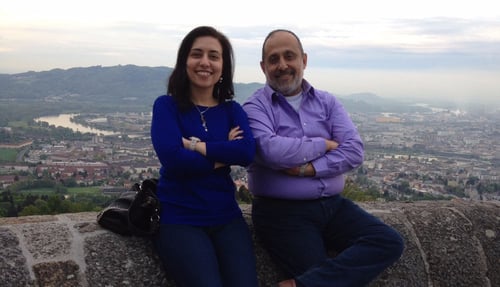 Stories that are told in the Burchett house usually start with the phrase, “When Daddy was a little boy…”

Forty years ago, as a family attending Neighborhood Church, we were encouraged to host international students from Chico State for dinner.  A handful of times I remember sitting with my little sister and parents around the table for a meal with these students, and even though it was  hard to understand them at times, I was very curious about the world, other nations and cultures that I would listen intently as they talked.

Spending time with people from other countries begins to open up your heart to loving people groups you have never known.

In 2013 a few of us on staff visited different countries in the Middle East.  When we were in Iraq seeing what missions adventures looked like, I fell in love with the Kurdish people.  We toured a holocaust type museum that told the story of Saddam Hussein’s systematic genocide of this people group.  We saw that the gospel was being preached among the Kurds and that they were responding to the good news of Jesus Christ.  Many of the stories of Jesus becoming real to the Kurds involved Jesus appearing to them in a dream which lead them to seek out our international workers to find out who He is.

After that trip to the Middle East, I began praying and asking the Father if it would be on his heart to sponsor an Arabic speaking ministry here in Chico.

After two years of praying and a few conversations with my Arabic speaking friends in other cities, nothing seemed to be happening.  I kept praying, believing that the Lord would give me the grace to change my prayers, and change my heart, if I wasn’t on the right track.

Two years later, at the end of a church service in the Dome I met a couple from Cairo who were sitting in the fourth row.

Upon meeting them, I instantly burst into tears, explaining that they were the answer to my prayers.  They looked at me wide-eyed, and I feared that in my zeal for this vision to be a reality I may have said too much.  To my amazement, they responded, yes, actually we have felt supernaturally called to Chico and to this church.   I started crying again, it just seemed too good to be true.

Over the next few months we get to know Abuna and Marian Youssef before they had to go back to Cairo.  We were amazed to find out he had been an Abuna (Father/Priest) in the Coptic Orthodox Church for 26 years.  The Lord confirmed over and over in supernatural ways that we were on the right track. Before returning to home to Egypt,  Abuna became a licensed pastor with the Christian and Missionary Alliance.

As a church, we raised funds to provide visas for Abuna and Marian to return and partner with the church doing ministry with Arabic speakers here in Chico, and in the past two weeks, all of the visa process was finished.

Abuna and Marian will be here this Fall, and then will head home at the end of December so their passports and visas can be stamped in Cairo.  When they return they will lead our Arabic speaking outreach here in Chico.

There are 120 Syrian Orthodox families here in Chico already, and numerous exchange students from Muslim countries.

These students will benefit from a mother and father who will speak in their language and who are able to explain the differences between Islam and Christianity from their heart.  We can’t wait to see what God has in store for us to do “missions” right here in our own backyard.

If you’re interested in joining Abuna and Marian on this adventure through prayer, being trained in evangelism or even giving funds you can contact our office here at Neighborhood Church.

The dining room table that I grew up sitting around with those exchange students has been handed down from my parents to our family.  It will be so sweet to have international students eating with us soon, once again!

My prayers that began back in 2013 are being realized and even though it has taken six years, I never gave up, continued to pray what God put in my heart and in His perfect timing they are being answered.