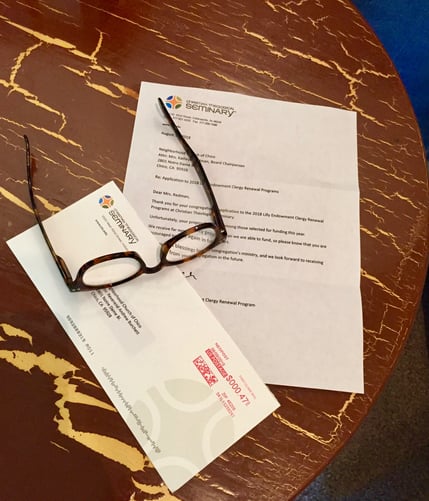 I breathed a deep sigh as I nervously opened the letter...

This was a letter that I had been waiting for the last six months with the news about whether or not I had been awarded a grant for my sabbatical next summer. I have been praying and believing the Lord for good things, and for His favor on this request.

My heart stopped as I read the words, “Unfortunately, your proposal was not among those selected for funding this year.”

I quietly returned to my office and sat alone in a sad state of what I will call “now what?” After busying myself for a few minutes I found Amy and told her about the letter that had arrived. I explained how I was feeling, describing my “disappointment, but somewhat relieved that I can now readjust my expectations.” The look on her face told me that I probably should be more devastated. She warned me that I might have some waves of discouragement about this later. It was a good word to my heart that I appreciated.

Upon driving home I called my wife and somberly shared the news with her, she too was deeply disappointed, having dinner with our board chair Kathryn Redman later that evening who worked hard to submit the proposal – it was clear we were all bummed that this amazing opportunity had not come to fruition.

The next day I was heading from my car into the church office when I heard the Lord whisper to my heart, “You have the opportunity to model Godly disappointment today.” I thought, golly, what does that mean?

Throughout the day there were different phases of dealing with disappointment.

What did I learn about what modeling Godly disappointment this week?

As I walk through the rest of this week, I am really leaning on the sovereignty of God over all things – and choosing to believe God’s goodness is still in full force. He has not forgotten me and His will has not been trumped by the enemy of my soul. Now I will listen for his voice to prompt me to re-plan and move forward.

Maybe you are facing some major disappointment much more difficult than my current situation.  May God lead you through your grief with a clear view of His sovereignty. He is the King, and He is in control, even when we are wildly out of control and our hearts are wounded. He will bring his peace, comfort, perspective, and ultimately His new plan, if we seek Him.