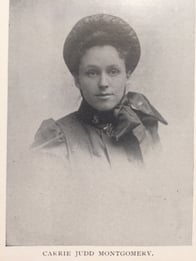 I am so proud to be a part of a movement with strong women who have taken faith-filled risks.

As we strive to empower women in leadership positions, sometimes it’s helpful to look back at where our movement has set a good example for us to follow.

One of the people who made a profound impact in the early days of the Christian and Missionary Alliance is Carrie Judd Montgomery.

She has a fascinating story of being healed, and then walking out a ministry of healing with others. The Judd family was living in Buffalo, New York when Carrie, at fifteen years old, suffered some sort of infection in her nervous system and was bedridden for about three years.  The pain moved to all her large joints, making it almost impossible to touch her.  They were expecting her to die and asking family to come visit to say their last goodbyes when her father came across a unique article in the local newspaper.

The article told of Mrs. Edward Mix, described as a “colored woman” from Connecticut, being healed of a similar disease through prayer.  Carrie asked her sister Eva to send this woman a letter requesting prayer for healing.  Mrs. Mix wrote a letter back, and told her that she would set a specific time to pray – and that they would pray from New York and Connecticut at the same time for Carrie’s healing.

Even though no one showed up to Mrs. Mix’s regular prayer meeting that day due to poor weather, she and her husband prayed for Carrie nonetheless.  Carrie prayed from her bed and felt a wave of faith to stand and walk across the room.  Unassisted, she walked over to a nearby chair, and her healing began that day.  Just weeks later she was able to climb the stairs and visit the neighbors.

News of Carrie’s healing spread and many came to her asking her to pray for them.  She began writing books like, The Prayer of Faith (1880) and encouraged others to embrace the pray for healing.

So many people came to her that she opened a room in her parent’s home where people could come to receive healing prayer.  This led her to open a healing home in Buffalo, New York in 1882.  It was the first of it’s kind in New York and was used as a model for many healing homes in the country.  Our founder, Albert Benjamin Simpson, opened his own healing home in 1883.

When A.B. Simpson came across Carrie’s testimony, he reprinted in his own periodical.

They were both advocates for divine healing, and realized that they were kindred spirits.  Simpson gave Carrie the pulpit at times to preach and share the miracles that God was doing through her ministry.   Simpson invited Carrie to be a part of the formation of the Christian and Missionary Alliance and he later supported her as she opened the first healing home on the west coast in Oakland, California.  She considered Simpson a spiritual father, referring to him at one point as the “kind of friend who we always think of as our pastor.”  Simpson performed Carrie’s wedding and later baptized her daughter, Faith.

There have been embarrassing moments in church history where men have used The Scriptures to limit and keep women silent.

As we move forward as a church, we felt it was important to come against this unhealthy attitude with the sermon I preached at our church recently.

If you missed the message on women in the church, I encourage you to click on the link below to see the Video Cast.