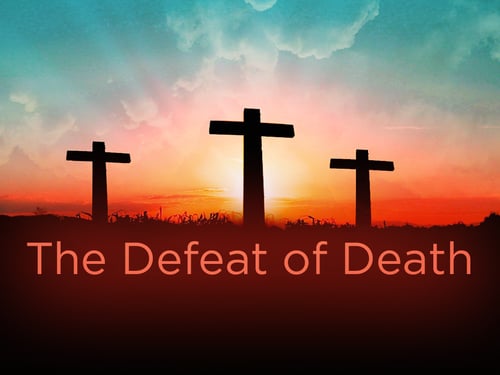 But it has now been revealed through the appearing of our Savior, Christ Jesus, who has destroyed death and has brought life and immortality to light through the gospel.

Jesus came to bring life and immortality to light through the gospel.  In order to do that, “Jesus had to defeat death”.

For those of us who have given our lives to Jesus, we have been made alive in Christ and we have become a new creation.

Jesus killed off death by means of His resurrection, proving that He is Lord over life and death.

When His friend Lazarus dies Jesus cries bitterly.  Why is Jesus crying after telling His disciples that Lazarus will rise again?  Is Jesus confused?  Did He forget what He said just a few days prior?  Is Jesus just a super sensitive person?

What would you think if I told you that although “Jesus wept” or was “deeply moved” in John 11:33,35,38, it was really more of a snort of anger that came from Him at the tomb of Lazarus?

Spoiler alert: I’m about to mess up every Jesus movie you’ve ever seen about the raising of Lazarus.

The Greek word we see in John 11  for Jesus weeping “embrimaomai”  really ties into a feeling of indignation, an angry expression that sounds like the snort of a war horse.  I suppose this could be bitter weeping that sounds like snorting?

We know that Lazarus’ family and other mourners were wailing in a loud voice.  Some mourners were actually hired to come and cry really loudly for the seven days of mourning for the recently buried dead.  They would also hire a flute player to play music to accompany the crying.  It’s quite a hectic scene at the tomb of Jesus’ close friend – so He cries and snorts passionately.

So, why is Jesus having this response?

I think there are three reasons.

2. Jesus is weeping because He loves this family

Now Jesus loved Martha and her sister and Lazarus. (John 11:5)

Jesus is fully God and fully human, so He experiences emotions and loss like all of us do.

In this case, his grieving is just an extension of His loving Lazarus and his sisters.

3. Jesus is weeping and snorting indignantly at his foe, death which has stirred up this crowd to weeping and caused such very real pain for this family.

Jesus is angry that death separates us from each other because of the effects of sin and death can  separated us eternally from God if you are not a Christian.   It is this righteous indignation that Jesus takes throughout the next week of His life, from this event until His death on the cross.  A death that is not forced upon him, but He willingly lays His life down for us.

As the Creator, He knows that we were not designed to experience death, that it is only a part of our existence because of sin entering the world.  Jesus came to restore all things, and make them new.  Jesus died to defeat death, so that we would have the right, and the opportunity to receive His life to the fullest both now, and forever.

I am so thankful to have a God who goes to great lengths to prove His love to me, while I was messed up, alone and lost; He died for me and offers me His life.  I’m glad Jesus snorted in anger at death and sometimes I feel like doing the same thing myself.

Please join us this Sunday as we continue in the book of John, Chapter 11.